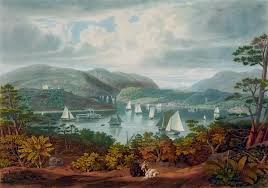 Read more »
Posted by Mary Simonsen at 2:22 PM No comments: 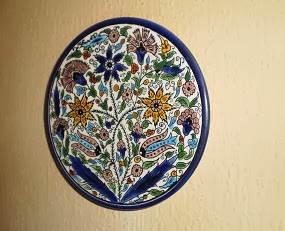 Darcy on the Hudson - Research and Background #3 - Thanksgiving

During the Federal Era in America, a time corresponding to the Regency Era in England, the biggest holiday of the year was Thanksgiving. At that time, more Americans lived on farms than in cities, and with the grain harvested, the fruit preserved, and the pig butchered, it was time to join with family and friends to celebrate with prayer, song, and dancing the gifts of the harvest.

In 1834, the New Hampshire Patriot made note of the approaching holiday: A moderate rise in the price of molasses and spices—the increased demand for laces, ribbons, and dancing pumps—the hurrying of tailors, milliners, and mantua makers—frequent and important consultation of young gentlemen—whispering, flushed faces, and anxious looks among young ladies—and lastly, a string of proclamations announcing the 27th of November as a day of Thanksgiving in New Hampshire, Massachusetts, Connecticut, and Vermont.”*

In my novel, Darcy on the Hudson, Fitzwilliam Darcy, Georgiana, and Charles Bingley travel to Tarrytown in the Hudson River Valley to visit Bingley’s Uncle Richard, who has been living in America for twenty-five years. In addition to the love story of Darcy and Elizabeth, the novel mentions the Thanksgiving traditions of the New York/New England area. Here are three excerpts:

Email ThisBlogThis!Share to TwitterShare to FacebookShare to Pinterest
Labels: American History, Darcy on the Hudson, Thanksgiving

Darcy on the Hudson - Research and Background #2 - Boscobel Manor House

The Bennet family home was modeled on Boscobel (pretty woodlands) now located in Garrison, New York overlooking the Hudson River. It was built in the early 19th century by States Dyckman and is an outstanding example of the Federal style of American architecture. Boscobel's distinguishing feature is the unusual delicacy conveyed by the front facade and its ornamentation.

From Wikipedia: “Dyckman, a descendant of early Dutch settlers of Manhattan, had managed to retain his family fortune despite being an active Loyalist... In 1794, he married Elizabeth Corne, daughter of another Loyalist family, who was twenty-one years his junior. After three years in London, Dyckman returned to the United States in 1803 and set about building the house he had long planned. Dyckman died in 1806 before it was finished. His widow completed it, and she and their surviving son moved into it in 1808. It would stay in the family until 1920.

Read more »
Posted by Mary Simonsen at 12:05 AM No comments:

Email ThisBlogThis!Share to TwitterShare to FacebookShare to Pinterest
Labels: American History, Boscobel, Darcy on the Hudson

Darcy on the Hudson - Research and Background - Dutch Colonial Architecture

When it gets to be this time of year, I think about the visit my husband and I made to the Hudson River Valley in the spring of 2010. The purpose of the trip was to conduct research for my book, Darcy on the Hudson, which is set in the months leading up to the War of 1812. Although I had read tons of books on the American Revolution and the Federal period that followed, there is nothing like being on-site. I thought I would share some of my findings with you.

When Mr. Darcy, Mr. Bingley, and Georgiana Darcy arrive in New York in 1812, they stay with Mr. Bingley’s Uncle Richard who was leasing a Dutch colonial house from his neighbor, Mr. Bennet, in Tarrytown. (Think Sleepy Hollow.) From Darcy on the Hudson:

Richard Bingley’s house was typical of colonial Dutch architecture in that there were no hallways, and a person must pass through one room to gain entry to another. A narrow staircase led to three rooms above, and for purposes of privacy, Georgiana was given the smallest room farthest from the stairs. Darcy and Mercer would be in the room next to Georgiana, and Charles would occupy the largest room, but also the noisiest, because of its location next to the stairs. But Georgiana would soon discover that there was an exterior staircase leading to a porch that wrapped around three sides of the house, a novelty the seventeen-year-old found delightful.

What did a house in the Dutch colonial style look like? According to the website, Life 123, most included the following features:

The door is almost always centered on the house - Cut horizontally, the bisected door allowed the top and bottom half to open separately if required. This enabled the flow of fresh air into the house while keeping domestic animals outside. It also allowed the owners of the house to keep the riff raff out. The missus could talk with visitors without the necessity of inviting them into the house.

Gambrel roofs are common - Long, sloping roofs overhang the doorway giving the appearance of a one-story home. Why? Gambrel roofs were said to have saved the Dutch from heavy taxes imposed on two-story homeowners. The Dutch were known for their thrift.

Stone or brick exteriors - The Dutch were know for their stone and brickwork and brought their talents to the New World.

Double-hung sash windows with wooden casements – They provided increased air circulation and allowed hot air to escape in the summer.

In Darcy on the Hudson, the Bingley house was modeled on Van Cortlandt Manor in Croton-on-Hudson, New York. Research on the traditions of Colonial Dutch New York was conducted at the Pieter Bronck House in Coxsachie, New York.

I am scheduled for a blog post on Austen Authors on November 21st, at which time, I will be giving away a copy of Darcy on the Hudson. More about that in later posts.