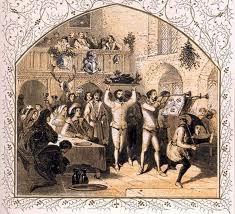 In Darcy on the Hudson, Mr. Darcy travels by sloop from Tarrytown to West Point. During his time on the river, one of the houses he would have passed would have been Clermont, home to the Livingston family, one of the oldest families in the Hudson River Valley.


Life had been good to the Livingstons of Dutchess County (including Philip, a signer of the Declaration). From their manor house, the Robert Livingstons could view some of their half million acres of land acquired through patent and marriage. Robert R. Livingston (1718 – 1775, aka “The Judge”) added hundreds of thousands of acres to the family’s landholdings when he had married Margaret Beekman,* a formidable woman from one of the most prominent old Dutch families in the Hudson River Valley.

When Robert the Judge died in 1775, he left Margaret and their children to face the trials of the Revolution. Most dramatic was the burning of Clermont and its outbuildings on October 19, 1777 by British troops under the command of General John Vaughan, who was throwing a hissy fit because of the surrender of the British Armies by General Burgoyne at nearby Saratoga. Once Margaret was informed that General Vaughan had burnt Kingston across the Hudson, she hid the silver and other valuables in her garden fountain. Other possessions were loaded aboard carts, and Mrs. Livingston, her daughters, servants, and slaves fled. Robert was not at Clermont during this time, but he would return to his childhood home to find only the foundation and exterior walls remained.

"Nevertheless, his mother (Margaret Beekman) energetically went about the task of rebuilding Clermont upon its original foundation and on the same Georgian plan. In order to get workmen, she wrote to Governor George Clinton requesting that he exempt skilled tenants, masons, carpenters, plasterers, etc. from military service, and he agreed. By 1782 she was able to entertain General and Martha Washington in her new home, the British forever gone from the Hudson River Valley." (Taken from the official Clermont site)

The Livingstons are excellent examples of the conundrum one faces when writing about the heroes of the Revolution. Yes, they "pledged their lives, fortunes, and sacred honors," but many had set off on that path because they were protecting their fabulous wealth. (Remember: “No taxation without representation.”) The Livingstons wanted to be free of British tyranny, but kept slaves. And they kept their heels on the necks of their tenants and were disinclined to sell their property to anyone, causing anyone seeking a better life to move westward. During wartime, Margaret Beekman had asked and had received the release of able-bodied men from military service to rebuild her house. But the bottom line is that if the Americans had not succeeded in their quest for independence, their leaders, including the Livingstons and Beekmans, would have had their estates confiscated, and Robert would very likely have hanged. As Abraham Clark of New Jersey, a signer of the Declaration, put it, they would have “freedom or a halter.”

An aside: In the 1920's, the Commonwealth of Virginia wanted to present a statue of George Washington to the British people. There was one problem. After the War of Independence, George Washington had expressly stated that he wished never to stand on English soil. The good people of Virginia were in a quandary. Fortunately, someone came up with the idea of shipping a truckload of soil to England. Outside the National Gallery in Trafalgar Square, a hole was dug and filled with good Virginia dirt, and a statue of George Washington placed on top of it. With the possible exception of Washington, everyone was happy.

*The Beekmans appear in Darcy on the Hudson

In Darcy on the Hudson, the United States is on the verge of going to war with Britain--again. For a quick recap of what The War of 1812 was all about, you might enjoy this video.
Posted by Mary Simonsen at 6:08 PM No comments: