Americans Have Been Big Eaters at Thanksgiving for a Long Time*

Proclamation of Thanksgiving:  In testimony whereof, I have hereunto set my hand and caused the Seal of the United States to be affixed. Done at the City of Washington, this Third day of October, in the year of our Lord one thousand eight hundred and sixty-three, and of the Independence of the Unites States the Eighty-eighth. By the President: Abraham Lincoln

Although a proclamation of Thanksgiving was issued in 1863 by President Lincoln, it was not until December 26, 1941 that President Franklin D. Roosevelt signed a bill into law making the fourth Thursday of November a national day of Thanksgiving. But long before those dates, Americans had set aside a day in late November to give thanks for a multitude of blessings. The turkey and all the fixings, the visiting, and church attendance that we have come to associate with a modern Thanksgiving were already well established by the time of Federal Era in America, a time that corresponds to the Regency Era in England.

In 1834, the New Hampshire Patriot made note of the approaching holiday: A moderate rise in the price of molasses and spices—the increased demand for laces, ribbons, and dancing pumps—the hurrying of tailors, milliners, and mantua makers—frequent and important consultation of young gentlemen—whispering, flushed faces, and anxious looks among young ladies—and lastly, a string of proclamations announcing the 27th of November as a day of Thanksgiving in New Hampshire, Massachusetts, Connecticut, and Vermont.”** Farmers harvested their pumpkins, gathered their eggs, fatted their pigs, and selected the best turkeys and chickens for slaughter, all in preparation for the biggest holiday of the year.

I recently completed a story at A Happy Assembly, Mr. Darcy in Old New York, where Mr. Darcy, Georgiana, and Mr. Bingley travel to Tarrytown in the Hudson River Valley to visit Charles Bingley’s Uncle Richard, who has been living in America for twenty-five years. Of course, Darcy falls in love with American, Elizabeth Bennet, but a lot of the history of the region, including the Thanksgiving traditions, is included. Here are three excerpts:

Although I love to write Jane Austen fan fiction and novels with Austen tie-ins, I do not profess to be an Austen scholar. But because so many people out there DO know a lot about Austen and her works, I am learning something all the time. At present, I am reading the annotated edition of Pride and Prejudice, edited by Patricia Meyer Spacks. In her notes, Ms. Spacks states that when Mr. Darcy tells Bingley that "I am in no humour at present to give consequece to young ladies who are slighted by other men," there is more there than I thought. When Darcy declares that he will not give consequence to Elizabeth, what he is actually saying is that because of his rank in society, by dancing with Elizabeth, he would have elevated her status. So not only did Darcy insult Elizabeth by saying she is merely tolerable, he knowingly refused to confer status on her. No wonder she disliked him!

The second nugget I mined was when Mrs. Bennet was recapping the night of the assembly for her husband. "Only think of that my dear; [Mr. Bingley] actually danced with [Jane] twice, and she was the only creature in the room that he asked a second time." Again, according to Ms. Spacks, when "a man asked a lady to dance, he would be expected to remain her partner for two dances. If he invited her a second time, they would share two more dances," i.e., four dances. That's a nice chunk of time to spend with one partner. So Jane truly was honored by Mr. Bingley's attentions.
Stay tuned for more nuggets or share your own. Mary

Email ThisBlogThis!Share to TwitterShare to FacebookShare to Pinterest
Labels: History, Pride and Prejudice

I have a post on Austen Authors today about an 18th Century kitten who fell overboard from one of those great wooden sailing ships. It's an amazing story. Better yet, it's true. And this provides me with an excuse to introduce you to the newest member of the Simonsen household, our cat, Lucy, who showed up at our house every day for a month. Her persistence paid off. I relented and now she runs the house. 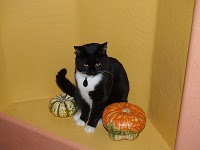 What to wear to the Pemberley ball?

I can whip out a blog post in a fairly short amount of time, but yesterday I spent an hour looking for a dress to wear to the Pemberley ball. Being a woman of a certain age, I wanted to wear something elegant, but nothing that would steal the limelight away from the younger girls who had just come out. I chose the dress at left. What do you think? Did I choose well?

Come One, Come All, To the Pemberley Ball 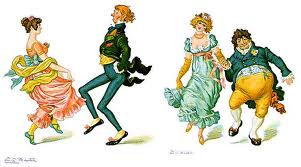 Velvet at vv32reads is hosting her Second Annual Pemberley Ball. (Please see invitation in the sidebar.) You may know one of the surprise guests. (That's a hint.) I hope you will join Velvet starting tomorrow. Let the dancing begin.
Read more »
Posted by Mary Simonsen at 4:00 AM 1 comment:

Pictures and Text to Supplement Mr. Darcy's Angel of Mercy

Here are a few pictures that might help people visualize some of the people and places mentioned in my story. (Click on title, Mr. Darcy's Angel of Mercy, in the sidebar to read the story.)

One of the most famous of the Voluntary Aid Detachments (VAD) of World War I was Vera Brittain, who wrote Testament of Youth. As Paul Delany wrote in Literature Criticism: When Vera Brittain's Testament of Youth was published in 1933 it struck a deep chord among those in England who felt, as she did, that their youth had been 'smashed up' by the Great War. Nearly a million men of their generation lay buried in Flanders and Gallipoli; many of those who remained felt condemned to hollow lives, haunted by loss and grief. They believed that those sacrificed had been men of special grace, the irreplaceable flower of the nation's youth; and they blamed the post-war decline of Britain on their absence. The survivors—guilty, perhaps, simply of having survived—were left to bear the burden of a disappointing and mediocre peace.

In the early days of the war, the Duchess of Westminster, who was married to the wealthiest peer in the realm, the Duke of Westminster, Bendor Grosvenor, outfitted a hospital in the casino at LeTouquet. She is pictured below with her Irish wolfhound and is surrounded by her nurses and VADs.

Posted by Mary Simonsen at 5:45 PM No comments:

While compiling a list of songs for my sister's birthday, I found myself thinking of how each song applied to one of Jane Austen's novels or their adaptations, so I thought I would share them with you. Keep in mind my sister was listening to these songs in the fifties and sixties.*

Why Must I Be a Teenager in Love? by Dion and the Belmonts – Catherine Morland falling in love with Henry Tilney