Fascinating Find Near Stonehenge: The Boy with the Amber Necklace

A group of scientists and researchers have gathered near Stonehenge in preparation for the the publication of a collection of research papers on Stonehenge. The following is one of the subjects under discussion:﻿﻿

Stonehenge Visited By Bronze Age Mediterraneans from Red Orbit
Chemical tests on teeth from an ancient burial site containing the 3,550-year-old remains of a teenage boy wearing a unique necklace unearthed near Stonehenge indicate that the person buried there grew up around the Mediterranean Sea… A previous skeleton unearthed near Stonehenge was analyzed and was found to also be a migrant to the area.﻿
﻿
﻿ ﻿ The “Boy with the Amber Necklace,”* as he is known to archaeologists, was discovered in 2005, about three miles southeast of Stonehenge on Boscombe Down. The remains were found next to a Bronze Age burial mound, during construction of a road for military housing. The boy is around 14 to 15 years old and “is buried with this beautiful necklace,” said Professor Jane Evans, head of archaeological science for the British Geological Survey. “The position of his burial, the fact he’s near Stonehenge, and the necklace all suggest he’s of significant status.” Professor Evans compared the Stonehenge in the Bronze Age to Westminster Abbey today: a place where the “great and the good” were buried.

There is a lot going on out there that I think may be of interest to my readers:

Austen Authors: Author and illustrator Jane Odiwe is the spotlight today. In addition to her excellent post, in which she speaks about Austen and her books, Jane has shared several illustrations with her readers. Also, in celebration of MARILYN BRANT'S second novel, Friday Mornings at Nine, her publisher, Kensington Books, is giving away a free ebook download of her Austenesque debut novel, According to Jane. Check Austen Authors for details.

Vic at Jane Austen World has an interview with, Patricia Meyer Spacks, editor of Pride and Prejudice: An Annotated Edition.

Any Austen fan would love to have this book on their shelf. Tony Grant has a post about the education of Jane Austen, also at Jane Austen World, with lots of illustrations.
Posted by Mary Simonsen at 1:00 AM 1 comment:

I know that many of you probably saw this over at Austen Authors, but I thought it was worth a rerun.﻿ This laugh is courtesy of E-mail Marketing Reports.

Email ThisBlogThis!Share to TwitterShare to FacebookShare to Pinterest
Labels: Humor 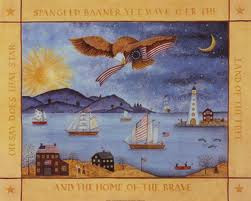 On this day in 1814, Francis Scott Key, a 35-year-old lawyer and amateur poet, finished his poem, Defence of Fort McHenry, after witnessing the bombardment of Fort McHenry by the British Royal Navy ships in Chesapeake Bay during the Battle of Fort McHenry in the War of 1812.

On September 3, 1814, Francis Scott Key and John Stuart Skinner set sail from Baltimore aboard the ship HMS Minden, flying a flag of truce on a mission approved by President James Madison to secure the exchange of prisoners. Key and Skinner boarded the British flagship HMS Tonnant on September 7 and spoke with Major General Robert Ross and then-Vice Admiral Alexander Cochrane over dinner while the two officers discussed war plans.

Because Key and Skinner had heard details of the plans for the attack on Baltimore, they were held captive until after the battle, first aboard HMS Surprise and later back on HMS Minden. During the bombardment of Fort McHenry, Key noted that the fort’s smaller storm flag continued to fly, but during the night, the storm flag had been lowered and the larger flag had been raised. Key was inspired by the American victory and the sight of the large American flag flying triumphantly above the fort.

In honor of the Battle of Britain Day, I am posting excerpts from two of Winston Churchill's speeches:


After the fall of France: "What General Weygand has called the Battle of France is over. I expect that the Battle of Britain is about to begin. Upon this battle depends the survival of Christian civilisation. Upon it depends our own British life, and the long continuity of our institutions and our Empire. The whole fury and might of the enemy must very soon be turned on us. Hitler knows that he will have to break us in this island or lose the war. If we can stand up to him, all Europe may be freed and the life of the world may move forward into broad, sunlit uplands.﻿﻿﻿﻿ ﻿
﻿ 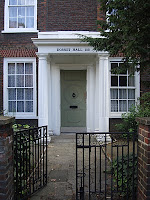 In an earlier post, I wrote about the 90th anniversary of women’s suffrage in the United States. Tony Grant, from London Calling, mentioned that the home of Rose Lamartine Yates served as a refuge for these persecuted women. Tony rode into the London Borough of Merton and took some pictures of Dorset Hall. He also provided a link to My Merton, a publication of the Merton Council, which included the following:

Amanda Grange, author of Mr. Darcy's Diary and Mr. Darcy, Vampyre, is featured on Austens Authors today. Also Sia McKye of Thoughts Over Coffee is featuring Austen Authors as well. Hope you will visit her blog and say hello.
Posted by Mary Simonsen at 6:42 AM 1 comment:

Jane Austen and Napoleon - 1812 - Two People Who Changed the World

Jane Austen spent most of the year 1812 making extensive revisions to First Impressions, but while Jane toiled away on her manuscript, events were taking place in Russia that would change the world. However, not a word about the Napoleonic Wars would appear in her masterpiece, the renamed Pride and Prejudice.

Read more »
Posted by Mary Simonsen at 5:09 AM No comments: