Jane and the Madness of Lord Byron - A Review

Jane and the Madness of Lord Byron by Stephannie Barron is a multi-layered Regency mystery, and the sleuth is none other than Jane Austen. Following the death of Henry Austen’s wife, Eliza, Comtesse de Feuillide, Jane and her brother make arrangements to visit the seaside town of Brighton. However, their plans for a quiet interlude fall by the wayside when a stop at a posting inn results in Jane and Henry rescuing a young lady, Catherine Twining, from a forced elopement with the scandal-ridden Lord Byron. When the girl’s body is discovered a few days later, a drowning victim, who is sewn into a canvas shroud and deposited in the bed of Lord Byron, the poet becomes the prime murder suspect.
Read more »
Posted by Mary Simonsen at 3:00 AM 5 comments:

Jane Austen Could not Spell - What Does This Change? 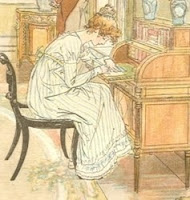 From newsgather.com: Jane Austen apparently could not spell. The exquisite writer was not only a poor speller, but also a poor grammarian at times. Austen had a lot of help from her editor.

A recent study by Oxford University English Professor Kathryn Sutherland revealed the truth about Austen’s spelling and grammar usage. Sutherland looked at 1,100 handwritten pages from Austen. Although Austen’s brother Henry claimed that "everything came finished from her pen," it appears that that claim was not the truth.

Sutherland read several unpublished manuscripts and found that the delicate precision of spelling and grammar is missing. In fact, there are blots and general messiness throughout. Also, Austen, like many, actually ended up breaking nearly all the rules for good English writing...

Continue reading the article at NEWS (newsgather.com) and...

Little G, the Daughter of the Duchess of Devonshire

﻿The snuff box sold at the Duke of Devonshire’s attic sale showed a picture of the most famous Duchess of Devonshire, Georgiana Spencer Cavendish, and her eldest child, Georgiana Dorothy Cavendish. (See picture in post below.) The Duchess, who was married to the 5th Duke of Devonshire, was bound to him in a loveless marriage, one in which he showed no affection for her, probably because he was showering his love on the Duchess’s dearest friend, Lady Elizabeth Forster, his mistress of 25 years, and co-resident of Chatsworth. Lady Elizabeth became the Duke’s second Duchess upon the death of Georgiana in 1806.
﻿﻿﻿
﻿﻿﻿ But what happened to Georgiana's little girl? Little G married the 6th Earl of Carlisle and took up residence at their beautiful home in Yorkshire, Castle Howard, the setting for the television series, Brideshead Revisited. The earl served in the moderate Tory government of George Canning. However, Carlisle split with the Tories over electoral reform and later served as a member of the cabinet in the Whig administration of Lord Grey. Ironically, Lord Grey had had an affair with Georgiana, the Duchess of Devonshire, and together they had had a child, Eliza Courtney Ellice. Lord Grey was married to Mary Ponsonby, a descendant of the 3rd Duke of Devonshire. Are we clear on this?

The Duke of Devonshire Cleans Out His Attic

When Peregrine Cavendish, the present Duke of Devonshire, inherited Chatsworth, the ancestral home of the Dukes of Devonshire, five years ago, he discovered that the attic of the manor house was stuffed to the gills with centuries of accumulated bric-a-brac. Crates of china, glass and silver, lanterns, lacquered screens, paintings, rocking horses, train sets, globes, a pram, stuffed animals and birds were among the attic’s treasures. According to His Lordship, “It was scarcely possible to open doors, let alone to store anything else.” His response was to contact Harry Dalmeny, deputy chairman of Sotheby’s, and to conduct “the greatest attic sale ever held.”
﻿

Sotheby’s estimated that the three-day sale in early October of 20,000 items would raise £2.5m. The final total was closer to £6.5m. The 400 people in attendance competed with 1,000 more registered remote bidders. The highest price was £565,250, almost twice the top estimate, paid for a 1735 white marble fireplace designed by William Kent for Devonshire House, the family’s enormous London home that was demolished in the 1920s to make way for the Green Park tube station. The fireplace had been dismantled into 30 pieces and stored in a building once used to repair tractors.

October 13 - A Busy Day in History

*409 – The Vandals cross the Pyrenees into Spain – not a good thing for civilization in general﻿﻿
*1307 – Hundreds of Knights Templar in France are arrested by agents of Philip the Fair. They were tortured until they confessed to heresy – not a good thing for the Templars. However, Philip the Fair enriched his coffers from the fabulous wealth of the Templars. “Fair” refers to the color of his hair not his treatment of others.

*1362 – The Chancellor of England opens Parliament with a speech in English for the first time. Prior to that, the address was made in French. In the same year a statute decreed that English was to be the official language of the courts, and English replaced French in the schools – good for the common folk who spoke only English.

Read more »
Posted by Mary Simonsen at 4:00 AM No comments:

Email ThisBlogThis!Share to TwitterShare to FacebookShare to Pinterest
Labels: This Day in History

The Story of Old English - The Building Blocks of a Language

I love English. It has a richness and depth that is unmatched by any other language. German has a vocabulary of about 185,000 and French fewer than 100,000. Compare that to the 650,000 to 750,000 entries in an unabridged English dictionary. According to The Adventure of English: The Biography of a Language by Melvyn Bragg, “Our everyday conversation is still founded on and funded by Old English… We can have intelligent conversations in Old English and only rarely do we need to swerve away from it. Almost all of the hundred most common words in our language, wherever it is spoken, come from Old English. There are three from Old Norse: “they,” “their” and “them,” and the first French derived word is “number” at seventy-six.” Here are the 100 most commonly used words:

I thought this Venn diagram was a riot. It appeared last week on Austen Authors, but I thought I would kick off the week with a chuckle. 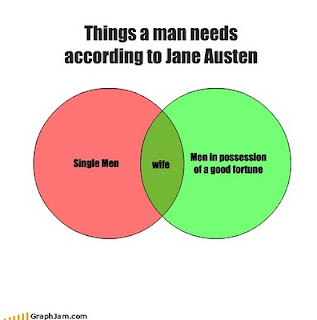 Email ThisBlogThis!Share to TwitterShare to FacebookShare to Pinterest
Labels: Humor

The American Book Review has posted what they consider to be the best 100 opening lines. Guess who is in the top ten? But here is my favorite:

In the last years of the Seventeenth Century there was to be found among the fops and fools of the London coffee-houses one rangy, gangling flitch called Ebenezer Cooke, more ambitious than talented, and yet more talented than prudent, who, like his friends-in-folly, all of whom were supposed to be educating at Oxford or Cambridge, had found the sound of Mother English more fun to game with than her sense to labor over, and so rather than applying himself to the pains of scholarship, had learned the knack of versifying, and ground out quires of couplets after the fashion of the day, afroth with Joves and Jupiters, aclang with jarring rhymes, and string-taut with similes stretched to the snapping-point. —John Barth, The Sot-Weed Factor (1960)

Thanks to Vic at Jane Austen's World  for finding this.