After 14 years and 27 deaths, the Brooklyn Bridge, spanning the East River, was opened. It connected the cities of New York and Brooklyn for the first time in history. Thousands of residents of Brooklyn and Manhattan turned out to witness the dedication ceremony, which was presided over by President Chester A. Arthur and New York Governor, Grover Cleveland. Designed by the late John A. Roebling, the Brooklyn Bridge was the largest suspension bridge ever built to that date.

John Roebling, born in Germany in 1806, was a great pioneer in the design of steel suspension bridges. Roebling is credited with a major breakthrough in suspension-bridge technology: a web truss added to either side of the bridge roadway that greatly stabilized the structure. Using this model, Roebling successfully bridged the Niagara Gorge at Niagara Falls, New York, and the Ohio River at Cincinnati. On the basis of these achievements, New York State accepted Roebling's design for a bridge connecting Brooklyn and Manhattan--with a span of 1,595 feet--and appointed him chief engineer. It was to be the world's first steel suspension bridge.

Just before construction began in 1869, Roebling was fatally injured while taking a few final compass readings across the East River. A boat smashed the toes on one of his feet, and three weeks later he died of tetanus. He was the first of more than two dozen people who would die building his bridge. His 32-year-old son, Washington A. Roebling, took over as chief engineer. Roebling had worked with his father on several bridges and had helped design the Brooklyn Bridge.

The two granite foundations of the Brooklyn Bridge were built in timber caissons, or watertight chambers, sunk to depths of 44 feet on the Brooklyn side and 78 feet on the New York side. Compressed air pressurized the caissons, allowing underwater construction. At that time, little was known of the risks of working under such conditions, and more than a hundred workers suffered from cases of compression sickness, or the "bends," is caused by the appearance of nitrogen bubbles in the bloodstream that result from rapid decompression. Several died, and Washington Roebling himself became bedridden from the condition in 1872. Other workers died from collapses and a fire.

Roebling continued to direct construction operations from his home, and his wife, Emily, carried his instructions to the workers. In 1877, Washington and Emily moved into a home with a view of the bridge. Roebling's health gradually improved, but he remained partially paralyzed for the rest of his life. On May 24, 1883, Emily Roebling was given the first ride over the completed bridge, with a rooster, a symbol of victory, in her lap. Within 24 hours, an estimated 250,000 people walked across the Brooklyn Bridge, using a broad promenade above the roadway that John Roebling designed solely for the enjoyment of pedestrians.

The Brooklyn Bridge, with its unprecedented length and two stately towers, was dubbed the "eighth wonder of the world." The connection it provided between the massive population centers of Brooklyn and Manhattan changed the course of New York City forever. In 1898, the city of Brooklyn formally merged with New York City, Staten Island, and a few farm towns, forming Greater New York. (Information was taken from several on-line sources. The pictures are from Wikipedia.)

Two movies that feature the Brooklyn Bridge: the awesome Moonstruck with Cher and Nicholas Cage and the cute Kate and Leopold with Meg Ryan and Hugh Jackman.

Also, on May 24, 1941, the German battleship, Bismarck, was sunk in the Atlantic, which provided a much needed victory to the British and raised British morale.
Posted by Mary Simonsen at 12:29 PM 4 comments:

I am just back from a week's vacation in Philadelphia, the City of Brotherly Love, so I have a lot of catching up to do, but here's a good start:

Check out Laurel Ann's Austenprose Hey Bonham’s! That Bentley Edition of Jane Austen’s Novels you’re Auctioning is Worth More Than you Thought!

Austenesque Reviews has a review of Alexa Adams' debut novel, First Impressions, and a poll on your favorite Northanger Abbey characters. 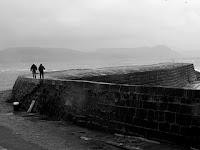 Tony (aka Southerner) has an excellent post on London Calling on the Cobb at Lyme, which played an important role in Jane Austen's Persuasion. There are several pictures, including the one at left.
Posted by Mary Simonsen at 4:15 PM 1 comment: 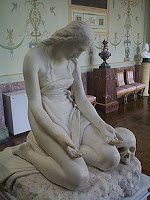 This started out as a series of posts of events that happened in the years ending in '10. If you want to read all the posts in one spot, click on "Jane Austen's World" in the sidebar.

Military: Napoleon enters Berlin; Joseph Bonaparte is name King of Naples; Louis Bonaparte is named King of Holland; Napoleon annexes the Papal States. It sounds as if everything is going Napoleon’s way. However, in 1809, Arthur Wellesley defeats the French at Oporto and Talavera and is created the Duke of Wellington. The final showdown will be at Waterloo in six years. Inspires ABBA song.

In 1807, the Act for the Abolition of the Slave Trade is passed in Parliament. It will be another 30 years before slavery itself is outlawed.

But while all this is going on, what has our dear Jane been doing. 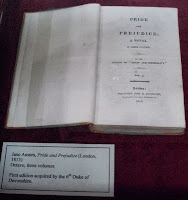 1775 – Jane Austen is born at Steventon on December 16, the seventh child of Rev. George Austen and Cassandra Leigh.
1795 – Eleanor and Marianne is written in epistolary form.
1796 – First Impressions (later Pride and Prejudice) is finished.
1798 – Northanger Abbey is written.
1801 – The Austens move to Bath.
1805 – Austen writes The Watsons and Lady Susan.
1809 – The Austens move to Chawton.
1811 – Mansfield Park is begun. Sense and Sensibility published at Austen’s expense.
1813 – Pride and Prejudice is published.
1814 – Mansfield Park is published.
1815 – Emma is published with a dedication to the Prince of Wales.
1815-17 – Persuasion is written.
1816-17 – Jane works on Lady Susan and Sanditon.
1817 – Jane dies at Winchester and is buried in Winchester Cathedral.
1818 – Persuasion and Northanger Abbey are published posthumously with a biography written by her brother, Henry.
1869 - A Memoir of Jane Austen is published by her nephew, James Edward Austen-Leigh, and reintroduces Jane to the literary world. A second edition was published in 1871 which includes previously unpublished Jane Austen writings.
1969 - One hundred years after the publication of A Memoir of Jane Austen,  Mary Lydon (aka, me) reads Pride and Prejudice in her senior high school English class. Forty years later, her first novel, Searching for Pemberley, is published by Sourcebooks.

Picture is of a first edition of Pride and Prejudice as displayed at Chatsworth House and owned by the Cavendish family, the Duke and Duchess of Devonshire.
Posted by Mary Simonsen at 7:53 AM 3 comments:

May Day - Past and Present

Traditional English May Day rites and celebrations include Morris dancing, crowning a May Queen, and celebrations involving a Maypole (see picture at right). Much of this tradition derives from the pagan Anglo-Saxon customs held in May, then known as the Month of Three Milkings. Before the English Civil War, the working peasantry took part in morris dances (see pictures below), especially at Whitsun (aka, Pentecost). In 1600, the Shakespearean actor William Kempe, morris danced from London to Norwich, an event chronicled in his Nine Days Wonder. The Puritan government of Oliver Cromwell, a notorious party suppressed Whitsun Ales and other such festivities (like all of them). When the crown was restored by Charles II, a real party animal, the springtime festivals were restored. In particular, Whitsun Ales came to be celebrated on Whitsunday, as the date coincided with the birthday of Charles II. 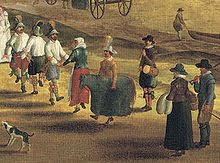 In Oxford, it is traditional for May Morning revelers to gather below the Great Tower of Magdalen College at 6.00am to listen to the college choir sing traditional madrigals as a conclusion to the previous night’s celebrations. It is then thought to be traditional for some people to jump off Magdalen Bridge into the River Cherwell. In Durham, students of the University of Durham gather on Prebend’s Bridge to see the sunrise and enjoy festivities, folk music, dancing, madrigal singing and a barbecue breakfast.