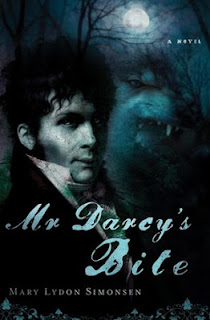 This review of Mr. Darcy's Bite from the Newark Star Ledger (New Jersey's largest newspaper) is a year old, but because Halloween comes around once a year, I thought I would rerun it. This review is particularly gratifying because the Newark Star Ledger was the paper my family read every Sunday when I was growing up in North Jersey. It had a TV guide before there was a TV Guide, and my sisters and I would fight over the insert to see what movies would be showing that week.

Now, where was  I? Oh, yes, the review. Here it is in its entirety.

This book is written with enough originality, whimsy and respect for Jane Austen’s style to make it stand out in the crowded field of Austen genre mash-ups. Simonsen revisits Darcy and Elizabeth’s tempestuous courtship and provides an explanation for Darcy’s erratic behavior: He’s a werewolf. Bitten on a childhood sojourn in Europe, Darcy has guarded his secret: He transforms at the full moon.
Because Simonsen carefully imagines how a werewolf nobleman would adapt to society and how that would play out with Austen’s characters, the story works as earnest rather than camp. After Darcy reveals his nature to Elizabeth, she must decide whether she still loves him. Simonsen’s characterizations are faithful to Austen, but engagingly playful with the possibilities of a werewolf double-life. His werewolf nature connects Darcy to the passions of the natural world, letting Simonsen ratchet up the couple’s romance. The classic love story between Elizabeth and Darcy holds firm, even if things do get a little hairy once a month.
Newark Star Ledger: Five Books You Will Be Able to Sink Your Teeth Into by Elizabeth Willse
Mr. Darcy's Bite is available from: Amazon and Barnes and Noble