On this day in 1818, English novelist, Emily Brontë, was born in Thornton, near Bradford in Yorkshire, to Patrick Brontë and Maria Branwell. From Wikipedia: "She was the younger sister of Charlotte Brontë and the fifth of six children. In 1824, the family moved to Haworth, where Emily's father was perpetual curate, and it was in these surroundings that their literary oddities flourished. In 1847, she published her only novel, Wuthering Heights, as two volumes of a three volume set (the last volume being Agnes Grey by her sister Anne). Although it received mixed reviews when it first came out, the book subsequently became an English literary classic. In 1850, Charlotte edited and published Wuthering Heights as a stand-alone novel and under Emily's real name.

Tea with Jane Austen by Kim Wilson, a Book Review

Tea with Jane Austen is a charming book, a lovingly told tale, of the importance of tea in the life of those who lived in the Regency Era. It is all here: How to make tea, tea and toast for breakfast (the usual breakfast fare for all but the wealthiest households), seeping the tea leaves, tea caddies and miscellaneous utensils, shopping for tea sets, and the different types of teas. In Austen’s time, tea was a valuable commodity that was kept under lock and key. In the Austen household, Jane was the keeper of the keys to the tea chest.

But, for me, the most interesting part of the book was Jane’s excursions into London to buy the best tea from Twinings warehouse. “[Jane] would have walked through a doorway that looked virtually the same as it does today... Once inside, she would have been greeted with the aromatic scent of many different sorts of teas… [S]he would probably have smelled the tea to judge its fragrance and character before she bought it.” 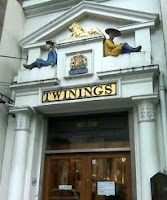 This was the most expensive way of buying tea, but there was a reason for buying the best. Tea was regularly adulterated with things you don’t want to think about. Dregs were sold out the back door by kitchen maids. After being dried, they were mixed with “leaves, twigs, and sometimes floor sweepings.” That’s if you were lucky. “The dyes used on adulterated tea were often quite poisonous.”

Although the afternoon tea we associate with the British belongs to the Victorian Era, there were rituals aplenty in the Regency Era, and this book shows how important tea was to Jane Austen and her contemporaries. Five stars.
Posted by Mary Simonsen at 8:44 AM 6 comments:

Josephine Ross's  Jane Austen’s Guide to Good Manners, Compliments, Charades & Horrible Blunders (with illustrations by Henrietta Webb) is a little book, duplicating the size of Austen’s original volumes. (Pride and Prejudice was published in three volumes.) It fits perfectly in my delicate feminine hands. The book is chock full of rules that kept everyone on the straight and narrow (at least for the middle and upper classes). For example, all ladies and gentlemen should carry calling cards, and once you visited with someone, you could not call again until the visit had been returned. This might leave someone twiddling their thumbs for a very long while if the visited party chose not to come a-calling.

Of course, the rules for young people were quite exacting, and if a lady was able to secure the affection of a gentleman, there was a whole other set of rules to observe, most especially, avoiding open shows of affection. Kissing, at any time, was out of the question. And so it went through marriage, child rearing, maturity, and death.

Occasionally, the author includes an interesting tidbit, such as “Manners Makyth Man is, of course, the famous motto of Winchester College, where the Authoress’s much-loved nephews were pupils; and it is no coincidence that… she gave the name of Winchester’s revered headmaster, Dr. Goddard, to the fictional proprietress of the modest little ladies school in Emma.” But mostly, it is a recitation of those rules that governed the lives of Jane Austen and her contemporaries.

Since we live in a time where just about anything goes, it might appear that people living in the Regency Era walked around in a cultural minefield. On the other hand, think how thrilling it would be for a young girl, new to society, to learn that a gentleman had approached a master of ceremonies at a dance for the purpose of seeking an introduction. It could almost make you swoon. Ladies, get out your fans.
Posted by Mary Simonsen at 9:48 AM No comments: 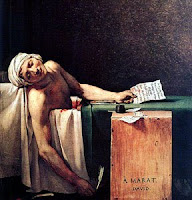 Today is the day in 1793 that Royalist supporter, Charlotte Corday, stabbed French Revolutionary, Jean Paul Marat, a supporter of Robespierre, to death. Because he suffered from a skin disease, Marat often spent hours in his bath, and it was there that he met his death. Corday did not try to escape and was sent to the guillotine four days later.

The painter, Jacques Louis David, was a disciple of the Revolution. He had visited Marat the day before his assassination and was able to recreate the scene of the crime.  However, he depicted an idealized version of Marat, free of all evidence of his skin disease. 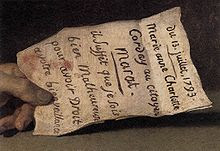 With Robespierre's overthrow and execution in July 1794, David fell out of favor and went into exile in Belgium. Fortune signed on him once again with the rise of Napoleon.

David's death: "When David was leaving a theater, a carriage struck him, and he later died, on 29 December 1825. At his death, some portraits were auctioned in Paris, they sold for little; the famous Death of Marat was exhibited in a secluded room, to avoid outraging public sensibilities. Considered a regicide of King Louis XVI, the body of the painter was buried at Evere Cemetery, Brussels, while his heart was buried at Père Lachaise, Paris.

"In one of history's great coincidences, David's close association with the Committee of Public Safety during the Terror resulted in his signing of the death warrant for Alexandre de Beauharnais, a minor noble. De Beauharnais's widow, Rose-Marie Josèphe de Tascher de Beauharnais would later be known to the world as Joséphine Bonaparte, Empress of the French. It was her coronation by her husband, Napoleon I, that David depicted so memorably in the Coronation of Napoleon and Josephine, 2 December 1804." Wikipedia
Posted by Mary Simonsen at 12:45 PM 3 comments: