My Pilgrimage to Chawton - Celebrating the 200th Anniversary of P&P

Our Chawton Home, how much we find
Already in it to our mind;
And how convinced that when complete
It will all other houses beat
That ever have been made or mended,
With rooms concise or rooms distended.

Letter from Jane to her brother James 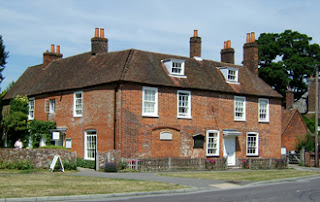 Like thousands of pilgrims before me, last spring, I journeyed to Chawton Cottage, the residence of Jane Austen, her sister Cassandra, mother Cassandra, and friend Martha Lloyd, during the last eight years of her life. It is a lovely house where Jane went to work revising Sense and Sensibility and Pride and Prejudice as well as writing Emma, Mansfield Park, and Persuasion.

Prior to her brother, Edward Austen Knight, providing his sisters and mother with the cottage, Jane had lived in Bath for a few years, and biographers agree that she was not happy there. Despite the pump room, assembly rooms, teas, dances, and gardens, Jane longed for the country and left Bath with “happy feelings of escape.” Her brother’s generosity of providing Jane with a house in the country is a gift to all of us. The years between Jane leaving Steventon Rectory and her arrival in Bath were fallow, but upon her arrival at Chawton, she more than made up for it.

Chawton’s setting is much more rural than it was in Jane’s time as the cottage was at the juncture of three roads, so there was hustle and bustle right outside her door. I was pleased to see just how roomy the house was. With Cassandra seeing to the running of the household, Jane would have had the time, space, and solitude she needed to write her brilliant novels. I especially liked how much the floorboards creaked. As Jane worked, the movements of her family and friend  would have served as a background to her writing.

While standing in Jane’s bedroom, I found the house meant a good deal more to me than I had expected. I have five sisters (four living), and growing up in a tiny two-bedroom apartment in North Jersey, we all shared a bedroom (two bunks, two sisters in one bed, and a folding cot in the middle). So there was nothing unusual about the idea of Cassandra and Jane sharing a bed. The room oozed sisterly affection, and it brought back good memories for me.

I had gone to Chawton expecting to examine the artifacts of a great writer, but it turned out to be so much more than that. I honestly felt Jane’s presence and her contentment at being in a place she loved, with people she loved, and doing what she loved. It was truly inspirational.

Congratulations on the 200th anniversary of the publication of Price and Prejudice. Your writing changed the world.

(This post originally appeared on the Austen Authors blog.)