The Rear of Charles I's Horse

When you see a road sign that says X miles to Salt Lake City or Toronto, do you wonder exactly where that spot is in Salt Lake or Toronto? If you have ever been curious about London and Paris, I can tell you where they are.

According to London Remembers, the backside of Charles’s horse “serves as the centre of London for the purposes of measuring distances.  Key “London” into Google Maps and this is where the pin is plonked. Also, supposedly, the street numbering convention is that the low numbers in a street should be at the end closest to this spot—a rule much observed in the breach.” 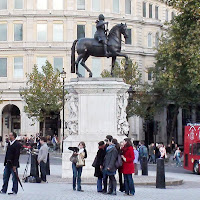 It’s been awhile since I wrote a book review, but I just loved The Daughter of Time. It has a lot of things going for it: It was published the year I was born (1951), it is history driven, and it is short (just like my attention span of late).

The mystery begins with Detective Inspector Grant of Scotland Yard laid up in the hospital with a broken leg. Supremely bored, a friend brings him museum postcards with portraits of famous historical characters who have mysteries connected with them (e.g., Louis XVII, the son of the guillotined Louis XVI - did he survive his imprisonment in the Concierge during the French Revolution?). Inspector Grant settles on the portrait of Richard III, the English king everyone loves to hate—thanks in large part to Shakespeare.

Read more »
Posted by Mary Simonsen at 1:41 PM No comments: