The Prince and the Author - Dedication of Emma

After finishing the post, please read the important postscript because it is, well, important.

One of Jane Austen’s most ardent supporters of her writing efforts was her brother Henry. Despite being cautioned by his sister that she did not want her identity known, Henry could not help but brag about his younger sister’s success, especially when the very popular Pride and Prejudice went into its third printing. It was Henry, from his sickbed, who successfully negotiated her agreement with John Murray, Lord Byron’s publisher, for her fourth novel, Emma. After an agreement had been secured with Murray, Jane went up to London to see if she could expedite the printing of her book. During her stay, she was contacted by Rev. James Stanier Clarke, the Regent’s librarian. His Royal Highness had learned that Jane was in town from his physician who also happened to be her brother Henry’s doctor.

Pearls of Wisdom from an Edwardian Nursery

I am reading An Edwardian Childhood by Jane Pettigrew. In this charmingly illustrated book, Pettigrew recounts what it was like to be a child growing up in an Edwardian Era home where there was sufficient income to hire a nanny. One of my favorite passages was "Nursery Philosophy," that included favorite sayings of Nanny, some of which have been around for hundreds of years: "Save your breath to cool your porridge," which appears in Jane Austen's Pride and Prejudice, or "Eating toast crusts makes your hair curl, so eat them up," a wisdom shared when I was growing up. (It'd didn't work.) Here are a few others: 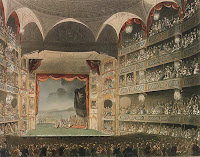 I love witty quotes, and Richard Brinsley Sheridan was a noted wit during his lifetime.

Before Noel Coward, there was Sheridan, poet and playwright, who wrote the brilliant comedy of manners, The School for Scandal, which was performed at the Royal Theatre, Drury Lane, during Jane Austen’s lifetime. She most assuredly would have been acquainted with the play as we know that she had read The Critic.

Richard Brinsley Sheridan (1751-1816) was born in Ireland and was the owner of Drury Lane. On February 24, 1809, the theatre burned down. He observed the conflagration while drinking a glass of wine, and Sheridan was famously reported to have said: “A man may surely be allowed to take a glass of wine by his own fireside.” This  man, who had once served as Treasurer of the Navy, was a notorious spendthrift and refused to satisfy his creditors on the grounds that “paying only encourages them.” For thirty-two years he was also a Whig member of the House of Commons and friend to Charles James Fox and the Duchess of Devonshire. He is buried in Poet’s Corner in Westminster Abbey.

What is Mrs. Bennet's first name? According to someone at Yahoo Answers, it is Blossom, which the respondent says Mr. Bennet used quite a bit. Who knew? LOL

P.S. Someone on meryton.com just informed me that Mr. Bennet calls Mrs. Bennet "Blossom" in the 2005 movie. I'll have to rewatch it now.
Posted by Mary Simonsen at 12:06 PM 7 comments:

Review of To Kill a Mockingbird

This year is the 50th anniversary of the publication of To Kill a Mockingbird by Harper Lee, one of the great novels of American literature. The story centers on the defense of a black man in Depression-era Alabama, who is accused of raping a white woman. A local lawyer, Atticus Finch, agrees to defend Tom Robinsion even though he knows that an acquittal is virtually impossible in the South of the 1930s. When asked by a neighbor why he is doing something that will only anger the town, he states: “[Even though] you’re licked before you begin, you begin anyway, and you see it through no matter what.” It is simply a matter of a decent man doing the right thing.
The heart of the story belongs to Atticus's six-year old daughter, Scout, her older brother Jem, and a visitor, Dill (based on Harper Lee’s friend, Truman Capote). Although they are merely children, they sense that a great injustice is about to descend on the head of Tom Robinson, whose only crime is that he is black. Forbidden by their father to attend the trial, they sit in the “colored gallery” in the courtroom and watch as Atticus destroys the case against Robinson.
Foreshadowing the tragedy that will soon unfold, when his children receive air rifles for Christmas, Atticus tells them that they can “shoot all the blue jays they want,” but they must remember that “it is a sin to kill a mockingbird.”  As a neighbor explains, “They don’t do one thing but sing their hearts out for us.” To Kill a Mockingbird is not a story about justice, because there is none, but individual courage and the death of innocence.

This is Harper Lee's one and only novel, but when you write a masterpiece your first time out, it is enough.
Posted by Mary Simonsen at 5:40 AM 6 comments: