Excellent Discussion on Austenprose of Sanditon Plus Fashion Plates

There is an excellent discussion about Austen's incomplete novel,  Sanditon, on Austenprose along with numerous fashion plates from the Regency Era with an expert who explains all of the details of the ladies's attire from head to toe. This series has already wrapped up, but it is well worth a visit. This is one of the best Austen blogs out there.
Posted by Mary Simonsen at 12:24 PM No comments: 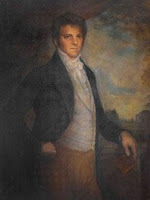 When you hear someone’s last name which starts with the prefix, “Fitz,” as in Fitzgerald, Fitzsimmons, Fitzpatrick, Fitzhenry, etc., you probably assume you are speaking to someone of Irish descent. So it is possible that Fitzwilliam Darcy was descended from a Hiberno-Norman family. And who exactly were the Hiberno (Irish) Normans (French) by way of England people? This group came to Ireland at the request of Diarmaid Mac Murchadha, aka Dermot MacMurrough, King of Leinster, who had been given the heave-ho by Tighearnán Ua Ruairc. (Try and pronounce that!) These Hiberno-Normans liked what they saw of the Emerald Isle, decided to stay, and freely intermarried with the Irish and became “more Irish than the Irish.”

Richard FitzWilliam, 5th Viscount FitzWilliam (1677 – 1743) was an Irish nobleman and politician. He succeeded to the Viscountcy of FitzWilliam in 1704, and became a member of the Irish Privy Council in 1715. He was elected as a member of Parliament for Fowey, a rotten borough in Cornwall. Now, you’re probably thinking that Cornwall is a long way from Derbyshire. However, that was the beauty of rotten boroughs. You didn’t have to live anywhere near them.


It is possible that this branch of the Fitzwilliam family had come from Ireland and migrated north to Derbyshire where they put down roots. Being of Hiberno-Norman ancestry, they might have intermarried with another Norman family, the Darcys. So it is possible, if not likely, that Mr. Darcy is of Irish descent.

I am making this claim because I am of 100% Irish descent myself. However, I come from a long line of Catholic, Irish-speaking peasants, and so it is unlikely that any of my relations socialized with the Fitzwilliams. Even so, I am pretty sure that we are related. (If Mr. Collins, the heir to Longbourn, the home of Elizabeth Bennet, just so happens to be pastor to Lady Catherine, Mr. Darcy’s aunt, then I can be related to Mr. Darcy.) So let us lift a glass of Guinness to Fitzwilliam Darcy and acknowledge how fortunate he was to have been descended from a Son of Ireland.

Note: Here is an article on the portrait of Colin Firth as Mr. Darcy which was auctioned at Bonham's in London for 12,000 pounds, twice the expected price.

P.S. Is Mr. Darcy's coat green or blue. I can't tell because I'm color blind. But if it is green, isn't that more proof that he's Irish?
Posted by Mary Simonsen at 7:59 AM No comments:

I love going to an Arizona Diamondback baseball game, and although I haven't lived in the New York Metro area for 30 years, I still root for the New York Giants. However, my favorite sport is bull riding. You know the George Strait song, "Amarillo by Morning," where he sings, "I'll be looking for eight when they pull that gate, and I hope that judge ain't blind," the "eight" he is talking about is eight seconds. That is how long the cowboy has to stay on the bull. Eight very long seconds. I became a fan when I lived in Texas in the 1980s, and so on Sunday, all of my family went to the Professional Bull Riding competition in Glendale, Arizona, and it was absolutely terrific. For a couple of hours, you can pretend that the West is still wild and the cowboys are still at home on the range. I know that this has absolutely nothing to do with Jane Austen, but I thought I'd share anyway. By the way, there were cowboys from all over the U.S., Canada, Australia, and a big contingent from Brazil. At one time, there was a Frenchman, but he retired, but Europeans are welcome.

The picture above is of last night's winner, L. J. Jenkins, on Voodoo Child. Here is what Jenkins had to say in an interview after the ride: "Why would L.J. Jenkins pick Voodoo Child – a bull who had only been ridden once in 34 outs on the Built Ford Tough Series – when there were 10 other bulls to choose from? Why would he choose a bull who had bucked him off two weeks earlier in just 4.5 seconds?  'Everybody’s been wondering why I keep picking him,'” Jenkins said after riding Voodoo Child for 94 points to win the Glendale Invitational, 'but I knew something that everybody else didn’t. I knew I could ride the bull.'"
Posted by Mary Simonsen at 6:45 PM 5 comments:

The Federal Era – America in the Georgian Era

Although Jane Austen is forever associated with Regency England, she actually lived most of her life in the Georgian Era. In America, this time period is known by the much more democratic name of the Federal Period. During this time, a young nation looked to ancient civilizations for inspiration, and thus was born the Greek Revival in the United States.
An example of America’s enthusiasm for Greece, Rome, and Egypt can be seen in the names given to the cities established during this period: Troy, Attica, and Ithaca, New York, Alexandria, Virginia, Cincinnati, Ohio, and Athens and Rome, Georgia, among others. Its greatest and continuing impact can be seen in architecture. Country manor houses (see Jefferson's Monticello in Virginia above) were designed with Ionic and Doric columns and/or cupolas, such as the Washington Monument, the Lincoln and Jefferson Memorials, New York Public Library and just about every 19th Century and early 20th Century state house.

America’s enthusiasm for all things Classical is the only possible explanation for Greenough’s sculpture of George Washington in toga-like draping. Commissioned by the U.S. Congress in 1832 in honor of Washington’s 100th birthday, it was modeled on the statue of Zeus in the temple on Mount Olympus, one of the Seven Wonders of the Ancient World. But a half naked sculpture of a man who had led America in its darkest hours during the Revolution and who was its first president had a real ick factor to most who viewed it in the U.S. Capitol Rotunda.

Many Americans found the sight of a bare-chested Washington off-putting and even comical. According to the Smithsonian Press, “After the statue was relocated to the east lawn of the Capitol in 1843, some joked that Washington was desperately reaching for his clothes. In 1908, Greenough's statue finally came in from the cold, and Congress transferred it to the Smithsonian. It remained at the [Smithsonian] Castle until 1964, when it was moved to the new Museum of History and Technology (now the National Museum of American History). The marble Washington has held court on the second floor ever since.” The Father of His Country as a frat boy is a must see for anyone visiting the District of Columbia. 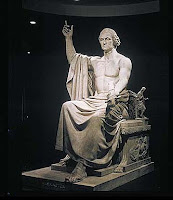 A Matter of Some Delicacy 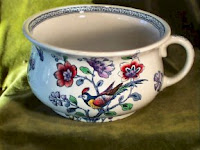 Every woman knows that when she goes just about any place where there is a crowd that she will end up standing on line for the restroom, but at least there will be a restroom. In the Regency Era, few houses had indoor toilets, and they relied on the chamber pot or the outdoor necessary. In the backstory for the 2003 film adaptation of Pride and Prejudice, it was noted that there were no indoor facilities, male or female, for the guests. As a result, a woman had to give a lot of thought to what she drank before and during an assembly or ball, such as the one that Charles Bingley hosted at Netherfield Hall, very much like we do before getting on an airplane. I assume that most women judiciously sipped their punch throughout the evening. Of course, for the men, a nice bush would suffice. Pictured to the right is a very pretty chamber pot from the Regency Era.
Posted by Mary Simonsen at 1:49 PM 4 comments: