My Take on Downton Abbey

Because so many bloggers have written their thoughts on the recently concluded Downton Abbey, I thought I’d chime in. Unlike Season 1, which was an outstanding drama on every level, Season 2 was a mixed bag.

The scripts – Frankly, the plots were terrible. In some cases, they were so bad that it affected the actors’ performances as with Lord Grantham and the maid. Even someone as talented as Hugh Bonneville wasn’t convincing as a man lusting after a servant. Why? Because he knew his character wouldn’t do that. The scripts gave him little to do except strut and pout, very unlike the Lord Grantham of Season 1.

It's not often I get two good reviews in one day for the same novel, but that was what happened yesterday at Diary of an Eccentric and Austenprose. Here are excerpts:

Diary of an Eccentric: Like Persuasion, Captain Wentworth Home from the Sea  is a sweet story about second chances.  I loved this book and was sad that it was so short....  I’d love to see this book expanded into a full-length novel!

Austenprose: Captain Wentworth Home from the Sea is a very pleasant diversion for Persuasion enthusiasts. Simonsen respects the intensity of Anne and Frederick’s love, and her alterations to Austen’s plot are neither extreme nor implausible.
Posted by Mary Simonsen at 10:46 AM 3 comments:

For about a year, I knew Claire Tomalin’s biography of Charles Dickens would be released in 2012, the 200th anniversary of his birth. Because Dickens is tied with Jane Austen as my favorite author, I eagerly awaited its release.

Tomalin’s research is amazing. If I wanted to know where Charles Dickens was on any given day, there’s a good chance she wrote about it. This is no easy feat because the man was constantly on the move. With the success of the serializations of his novels, he had the money to travel back and forth to the Continent and to the United States as well. But what I wanted out of this biography was to get into the man’s head. I wanted to know what magic he used in creating Mr. Micawber, Mrs. Havisham, Uriah Heep, Pip, Fagin, the Artful Dodger, etc. But it is not in this book. Perhaps, it is not in any book.

Me? A Romance Novelist? I don't think so.

I'm posting today on Austen Authors. Are you a romantic? Practical? A practical romantic? Please let me know.

By the way, that is my wedding picture. Paul and I married on June 12, 1976. It is one of the few pictures I have because the person who took all the photos over-exposed the film. But I got the guy, and that's what matters.

Charles Dickens and the Heiress 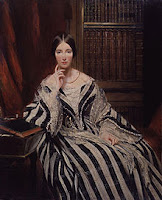 Angela Georgina Burdett-Coutts, 1st Baroness Burdett-Coutts (21 April 1814 – 30 December 1906) was a nineteenth-century philanthropist, and the granddaughter of banker Thomas Coutts. In 1837, she became the wealthiest woman in England when she inherited her grandfather's fortune of nearly three million pounds sterling. She spent the majority of her wealth on scholarships, endowments, and a wide range of philanthropic causes. One of her earliest was to establish, with the novelist Charles Dickens, Urania Cottage, a home that helped young women who had turned to a life of immorality including theft and prostitution. By the time of her death, she had given more than £3 million to good causes. She was buried on 5 January 1907 near the West Door in the nave Westminster Abbey.*

In 1847, Dickens found a small, solid brick house near Shepherd’s Bush, then still a part of the countryside and surrounded by fields. The idea was to create a home environment rather than that of an institution. Miss Coutts funded the project for about £50,000 per annum in today’s money.