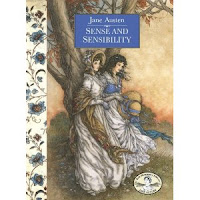 “In 1795, as Jane Austen was writing Elinor and Marianne, to be revised in 1797 and 1798 as Sense and Sensibility, Britons were experiencing the first financial crisis of Austen’s lifetime, the economic results of a harvest failure of biblical proportions.” Dr. Sheryl Craig in "The Economics of Sense and Sensibility"

This is the opening paragraph of one of the most interesting articles I have ever read about the economics of Jane Austen’s novels. The crop failure mentioned above affected everyone in England, but most especially the poor who were already struggling to get by. A population existing on the edge of starvation looked to benefactors and the government for assistance: “John Dashwood and the Members of Parliament initially promised to provide for those entrusted to their care, and surely it is no coincidence that Austen’s characters and her contemporaries were destined to be disappointed.”

What I did not realize when reading Sense and Sensibility was the importance of “place.” Norland, the Dashwood ancestral home, is located in Sussex. At the time S&S was written, “one in four people living in Sussex were classified as paupers. Another problem was that the taxes collected to aid the poor were being diverted…” and did not reach the poor.

The book's bad boy, John Willoughby, lives in Somerset, “a difficult county for the poor… The wages were low…, and the poor taxes were also low… Perversely, Willoughby is not only a wastrel, he is fully aware of the fact and yet unwilling to curb his excess.”

But there is an entirely different attitude toward the poor in Devon. The recently widowed Mrs. Dashwood and her three daughters are rescued by Sir John Middleton. “The reader’s first clue that Mrs. Dashwood’s relative is a very different kind of man [from her stepson John Dashwood] is the placement of Sir John in Devon. The poor rates of Devon were progressive and above the national average." An example given of the benefits of this progressive attitude toward the poor is that milk, considered a luxury in most of England, was a part of the daily diet of the people of Devonshire.

The people of Jane Austen’s time would have understood that by leaving the stingy John Dashwood and Sussex behind, the fortunes of the Dashwood women would improve in the more generous Devon. The placement of John Willoughby in Somerset was a hint that this man was going to be trouble for Marianne Dashwood.

S&S is all about "place" and possibly "name" as all three men whose lives interact with the Dashwood women are named "John."

I would recommend that you read Dr. Craig's entire essay which is available here.