(1778-1851) is the story of the only surviving child of Marie Antoinette and Louis XVI of France. Because of their tragic end on the guillotine, the royal couple is a favorite of biographers and historical novelists, and the first third of the book recounts the circumstances that led to their execution, the difference being that, in Marie Therese, we are looking at these events through the eyes of a young girl. The downward spiral that began with the storming of the Bastille and led to the Reign of Terror started when Marie Therese was only 11 years old. While at Versailles, "Madame Royal" was forced to hide from armed mobs screaming for her mother's blood and to step over the butchered bodies of servants.

Three years later, the king, queen, Marie Therese, and her brother, the Dauphin, Louis-Charles, are incarcerated in the Temple Prison in Paris, and the horrors begin: the execution of her parents, the prolonged torture of her little brother who would die of neglect, and her own imprisonment. When she is finally released 3-1/2 years later, she is allowed to join her mother's brother, Emperor Franz II, in Austria. However, "The Orphan of the Tower" is now a young woman of steely resolve and one who recognizes the importance of her role as a representative of the Bourbon dynasty in exile.

In the years following her release from prison, Marie Therese and her husband, the Duc D’Angouleme, lived a peripatetic existence, finally ending up in England, where they watched the events unfolding in France. With Napoleon's defeat at Waterloo, the Bourbon dynasty was again restored. For the next 15 years, France would be Marie Therese's home until, once again, the French wanted to be rid of their king, Charles X.

Marie Therese is an exhaustive, highly detailed account of the life of Madame Royal, the French Revolution, and the complexities of European politics in the early 19th century. In addition to the great events in the lives of the royals, minutiae, such as travel itineraries, meals, the appearances of numerous pretenders to the throne, are recorded. At times, the inclusion of so many mundane details bogs down the book, but for anyone who ever wanted to know what happened to the only surviving child of Marie Antoinette and Louis XVI, they will have to wonder no longer. 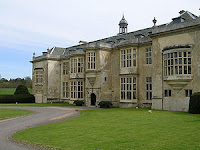 After exile in Vienna, Marie Therese and her husband moved to Great Britain in 1809 where she settled at Hartwell House, Buckinghamshire. Marie Therese's  father-in-law, the Comte d'Artois, spent most of his time in Edinburgh, where he had been given apartments at Holyrood House.

The long years of exile ended with the Napoleon's abdication  in 1814 and the restoration of Bourbon dynasty. The ascension of  Louis XVIII  to the throne of France took place twenty-one years after the death of his brother, Louis XVI.
Posted by Mary Simonsen at 6:01 AM 3 comments:

Irena, at This Miss Loves to Read, has a review of Tea with Jane Austen. It's a slim volume, but it sounds very interesting. This book will go on my "must buy" list and will end up on the top of my floor-to-ceiling "to be read" pile.
Posted by Mary Simonsen at 9:33 AM 3 comments:

Applying to the Housekeeper on Austenprose 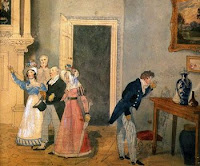 If you have been following Laurel Ann's Jane Austen Without Zombies on Austenprose, you know that she has had excellent posts, including one titled "Applying to the Housekeeper," which refers to those tourists seeking permission to tour some of England's great manor houses. In Pride and Prejudice, Darcy and Elizabeth meet for the first time after the dust-up at Hunsford Lodge because Lizzy and the Gardiners are touring Pemberley, Darcy's great country estate in Derbyshire. The tour, led by the estimable Mrs. Reynolds, reveals to Lizzy a kinder, gentler Mr. Darcy, and the thaw begins. This post is chock full of interesting tidbits, so you might want to check it out.
Posted by Mary Simonsen at 9:26 AM 1 comment:

Last week, my husband and I spent a week in New York’s Hudson River Valley, and everywhere we went, we found evidence of the Dutch influence on that area, including a type of art known as Hindeloopen. According to Dutch Proverbs by Holly Flame Heusinkveld and Jean Carris-Osland, Hindeloopen was a thriving seaport on the Zuider Zee in northwest Netherlands. During the Baroque and Rococo periods, guild and self-taught painters lavished their decoration skills on painted wood surfaces, such as furniture and walls, in an attempt to brighten home interiors and add inspiration to their surroundings. Hindeloopen villagers developed a distinct style of painting. Drawing from the scrolls of the Baroque period, the exotic birds of East Indian art, and the stylization of flower forms, the Hindeloopen painters came up with unique folk art forms. The objective was to fill a space, be it a table leg, door panel or storage chest, with flowers and berries or birds, in a stylized fashion.

In a Dutch colonial home, you may have found Hindeloopen artwork used to illustrate a proverb, such as "Zwijgen antwoordt veel." (Silence answers much.) Words of wisdom that I could benefit from (or so my husband tells me).
Posted by Mary Simonsen at 9:51 AM 3 comments:

Fashion of the Regency Era

In connection with Austenprose's Pride and Prejudice Without Zombies Read-A-Thon, Vic from Jane Austen World, has contributed an article on elegant apparel of the Regency Era and discusses the ball gowns worn in the three adaptations of Pride and Prejudice: 1980's version with Elizabeth Garvie, the A&E production with Jennifer Ehle, and the most recent film with Keira Knightley. It is excellent and a must read for anyone interested in Regency fashion.
Posted by Mary Simonsen at 9:19 AM 1 comment:

Beau Brummel (at left) was born in England in 1778.  He started a revolution in men's fashion that would eventually lead to the three-piece men's suit that is worn by businessmen around the world. The three-piece suit would dominate  until "Casual Fridays" were introduced in the late 1980s, followed by the oportunity for many to work from home where you can pretty much work in anything or nothing.
I wonder if we would be as gaga over Mr. Darcy if he dressed as his father would have as indicated by the picture on the right. Mr. Darcy in a wig? I don't think so.
Posted by Mary Simonsen at 8:03 AM 4 comments: