A Visit to Jane Austen Centre in Bath

I arrived at the Jane Austen Centre in Bath on a day where it was umbrella up and umbrella down, umbrella up and umbrella down, etc. It was getting late in the day, and the tours had just ended. This is pretty much how my husband and I travel. We have not toured some of the best known tourist sites in the world. An example: When we were in Paris in 1985, it was Memorial Day weekend, just as in the States. We did not know that everything shuts down in France for the holiday, including the Louvre, Musee d’Orsay, etc. It was suggested by a French woman that we visit the Arch de Triomphe where the U.S. Air Force band would be playing. Ah, the irony! (We did visit these sites on our most recent trip. We only had to wait 27 years!)

But back to the Centre. With their doors closing, I only had time to thank the greeter at the door, a handsome man dressed from top hat to Hessian boots, who is possibly the most photographed man in England. We picked up a map of locations of Bath’s great sites and the houses in which Austen had lived (one of them right down the street as it turns out). In looking around the gift shop, we noticed that the Centre was not averse to promoting the film and television adaptations of Pride and Prejudice, Sense and Sensibility, etc. Colin Firth was everywhere, including his portrait as Mr. Darcy.

A Personal Story of Decoration Day 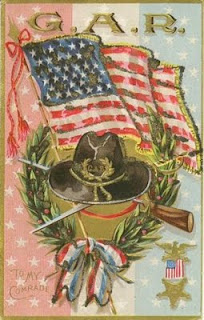 My great great grandfather, William Mahady, was the first of my family to arrive in America. He left County Mayo in the northwest of Ireland around 1840, probably sailing from Queenstown (now Cork) in the far south. He made the voyage in a wooden ship with his older sister, Catherine. They arrived in New York City and traveled up the Hudson River where Catherine was employed as a domestic for a family who lived near West Point. William probably went to work on the D&H Canal that would eventually connect the coalfields of Pennsylvania with the Hudson River and New York City.

In 1854, when he married his wife, Mary Loftus, he was one of thousands of workers living in a workers’ camp near to the rails bein layed  for the D&H Railroad. In the 1860 census, he is living in Minooka, Pennsylvania, a coal-mining town south of Scranton where all my Irish ancestors from Cork and Galway would also settle. He was one of the first to inhabit this tiny hamlet. 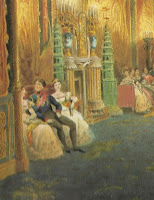 I recently visited the Royal Pavilion at Brighton, and all I can say is that it is one heck of a place. The interiors are heavily influenced by British concepts of what they thought China looked like. The exterior definitely leans towards India, and the whole thing has the feel of one of those dreams you just can’t explain and wonder how these images ever got into your brain.

As a lover of history, I could not help but think of the vast, and I do mean vast, sums of money spent on this pleasure palace at a time when the country was in a financial crisis. These were the years after the end of the Napoleonic wars. The men who had marched and sailed against the Emperor of the French were now out of a job, and many of them were badly maimed and in need of medical attention and, most definitely, in need of financial assistance. Because England was no longer feeding large armies, prices for corn (any grain) and meat on the hoof had plummeted throwing farmers into bankruptcy and putting laborers on the road. Yet, here was their king acting like a kid with a Regency Era credit card.

Although the Pavilion is within easy walking distance of the beach, because the king’s presence attracted tourists to Brighton, George IV, growing fatter by the day, rarely went out in public. And it wasn’t as if he had an ocean view. His descendant, Victoria, noted that from her rooms only the slightest glimpse of the channel could be seen.

Funny Thing Happened on the Way to the Louvre

I recently traveled to Paris with my husband and younger daughter, Kate, to visit the great museums and to walk one of the most beautiful cities in the world. But a funny thing happened on the way to a nighttime view of the Louvre. On May 6, the French went to the polls and elected a new president, Francois Hollande. We were out and about when the election results were announced. Our first hint that something big was about to happen was when car horns started going off. The second was when we were in the Place de la Concorde and found TV camera lights trained on US! We thought, "What a welcome!" But as the crowd grew, we realized that this was not a French welcoming committee. Before you knew it, the three of us were parading with thousands of  Parisians shouting "Vive le France!" We walked merrily along, enjoying the enthusiasm of the crowd, but when the numbers started approaching 10,000, we decided to leave the French to their celebrations. It was quite a night, the merrymaking going on for hours.

Can you find Paul, Kate, and me in the picture? I'll give you a hint. We are center right, just above the white marquee.