Meet the Greatest Generation - My Family

During World War II, everyone pitched in. If you were a farmer, you worked longer and harder to grow more food for civilians and the military. If you were a miner, you dug more coal. If you were a little kid, you collected rubber and metal and saved aluminum gum wrappers. Women moved in droves to Washington to work as clerk typists, including my Mom, for the princely sum of $1,440 per year.  But if you were a male between the ages of 18 and 35, there's a good chance you were in uniform. From left to right: Uncle Joe, Aunt Mim, Uncle Tom, Aunt Ann, and friend. 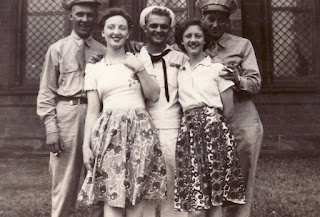 Uncle Joe was on Omaha Beach on D-Day and Uncle Tom was on the USS Pompoon that was sunk off of Cuba. He survived, but most of his shipmates didn't. Aunt Mim and Aunt Ann worked as clerks in Washington. After the war, Mim went to work for the State Department in Berlin where she met her husband who had fought in a tank in the Battle of the Bulge. My father's cousin, Patrick Faherty, died when his ship was sunk off the Carolinas. Unfortunately, there is no picture of him. These are just a few of the dozens of pictures I have of my family's contribution to the war effort.

Posted by Mary Simonsen at 5:06 PM